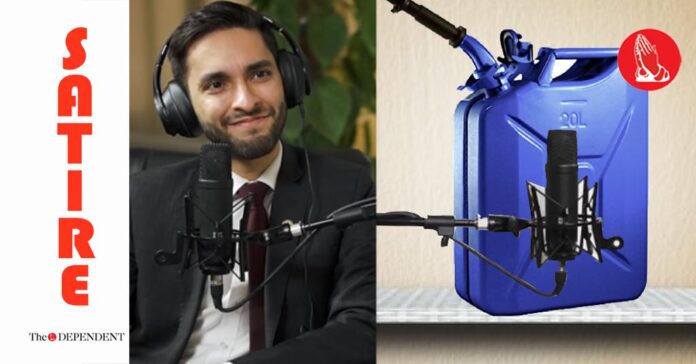 ISLAMABAD – In a new tell-all, long-form, youtube podcast hosted by Syed Muzamil Hasan, a canister of petrol revealed details of how it was given the space and freedom to grow and reach new heights under the incumbent Pakistan Tehreek i Insaaf (PTI) government.

“I was inspired by this government. Under erstwhile governments, I wasn’t really appreciated. I wasn’t given my value. But under Imran Khan I have finally managed to get to almost Rs 150/liter,” said the canister of petrol. “And I am so grateful that I’ve been allowed to get to this point,” it said as Muzamil looked at it intently, nodding and beaming with pride.

The more than hour long interview spanned over a number of issues, and started with a short introduction to the guest. “Basically, I am a naturally occurring liquid found beneath the earth’s surface that can be refined into fuel. I was formed when large quantities of dead organisms–primarily zooplankton and algae–underneath sedimentary rock were subjected to intense heat and pressure,” said the canister. “A lot of people just see me for the canister I have on the outside, but   it is the inside that counts.”

Muzamil also asked the canister some hard hitting questions, including how it could be all praise for Imran Khan despite their past. “I know he said I should have been even cheaper back when I was already pretty cheap, but he is a changed man. Now he says I should be even more expensive! I think no matter the past, actions speak the loudest,” said the canister.