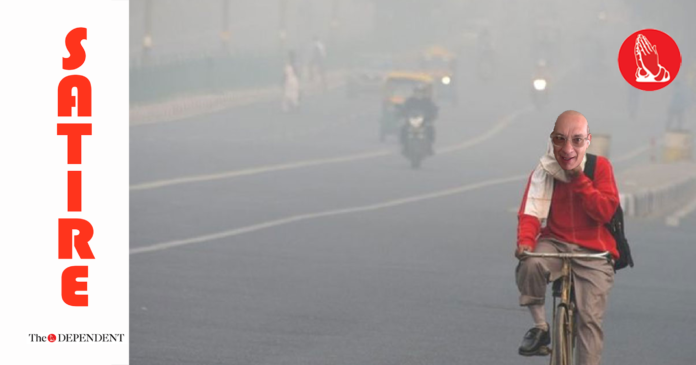 LAHORE – World famous American actor Tom Hanks is in Lahore! Yes, he has begun filming for his next post-apocalypticsurvival movie.

Sources within the production team have informed The Dependent that the entire film ‘Trapped in Mozang Chungi’ is to be shot in the historical and culturally diverse ‘Heart of Punjab’.

Hanks’ entourage has said that it will be a welcome and innovative addition to his incredibly moving roles in survival dramas like ‘Cast Away’ and the emotional flick ‘Finch’ — and is said to merge certain elements of the two in a smoky mélange.

The plot of ‘Trapped in Mozang Chungi’ revolves around an American diplomat stuck in Lahore indefinitely after sudden and unpredictable societal collapse and anarchy.

The Dependent caught up with the tall and handsome Tom Hanks, armed with a gas mask and a bag over his shoulder, as he was wrapping up shooting for a scene, around sunset, justoutside the Badshahi Mosque.

“We’re thrilled to have you here Tom, how do you like Lahore?” Hanks, squinted through the fog, to get a clearer look at our reporter, and replied, “It’s very interesting, and it’s the perfect set for a survival movie. I mean we don’t need any special effects. Its freezing, its foggy, and the air…”

Hanks paused to take a deep breath of his inhaler. “Good Lord, it’s so toxic, I don’t even have to pretend I’m out of breath”, he finished with a gasp.

Hanks continued, “Last night, the rest house I was staying at ran out of gas and electricity, so I had to build a wood fire. I haven’t been able to shower in days! That really got me into feeling my role!”

We also asked Tom what he thought of our Pakistani people, and he said, “The locals are great really, and nothing like I expected. I was expecting more of a desert landscape with conservative gypsy tribes,” he said as he paused to pay and smile at a child beggar.

“But I’ve met some Pakistani actors and singers and everyoneseemed so progressive! I even stopped at Islamabad for tea with the Prime Minister and was astounded by his knowledge of my work and of American life, Also…”, Hanks was cut short midway by a terrible bout of coughing and hastily grabbed his gas mask to put it on. We waved goodbye as he set off into the sunset and back to his film set.

Commenting on the film, Special Assistant to Punjab Chief Minister Punjab on Tourism Hasaan Khawar told The Dependent that this would be an excellent opportunity to boost tourism across the country and get foreign aid.

“People from all over the world still go to Pripyat, Ukraine to witness the nuclear fallout from the Chernobyl disaster. They can now experience smog and extreme weather conditions in our very own Punjab.”