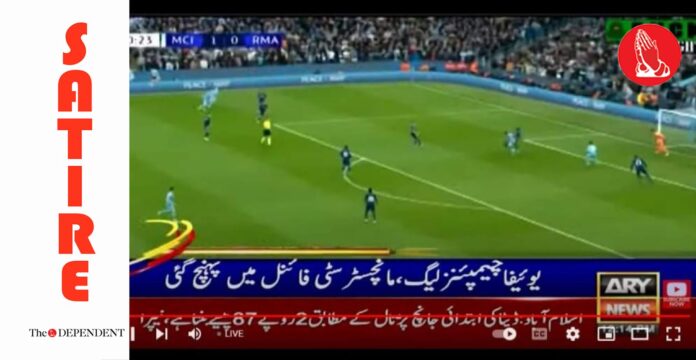 KARACHI – Reflecting the dire straits that the local media finds itself, Pakistan’s premier news channel ARY has handed over its sports desk to its veteran election coverage team, The Dependent can sadly confirm.

ARY, for long the emblem of press freedom and resistance against clampdown on free speech in the country, now has its limited staff carrying out multiple shifts, and managing multiple desks, just so the flag of freedom of expression in Pakistani media can continue to fly.

The Dependent has learnt of the plight of the short-staffed newsroom at ARY, with even the prestigious election cell members being asked to stay late for European football nights.

The desk’s coverage of the first seminal legs of the UEFA Champions League was nostalgic for the channel’s dedicated viewers and staffers alike.

“We reported on the Manchester City Real Madrid semifinal like we have reported on any election –general, by, or local – for a good part of a decade now,” said the election cell head while talking to The Dependent.

“It was as much breaking sports news as it was a tutorial on the upcoming election coverage,” confirmed another member of the desk.

“The second leg of the Champions League semifinal will be a lesson on how to post-report to cover for pre-reporting, especially on Election Day.”

- Advertisement -
Facebook
Twitter
Linkedin
WhatsApp
Email
Previous articleGeo News Report: I am not given any coverage on Geo News, says Imran Khan
Next articleImran Khan was about to hand over Pakistani bases to Farah Gogi: Marriyum