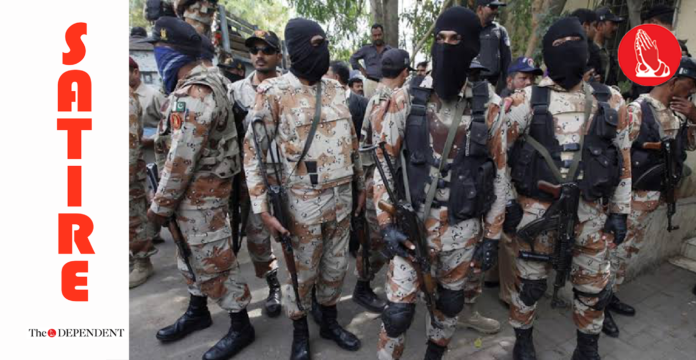 Amid the tense political climate prevalent across the country due to former PM Imran Khan’s unceremonious and premature removal from office leading to a degree of polarization that has divided even the closest of family members and friends, Rangers have been stationed across nation’s dining rooms to ensure peaceful Eid lunches.

Anticipating additional tensions between family members during the holidays this year where arguments could very easily convert into physical violence, Federal Interior Minister Rana Sanaullahcalled in Rangers to keep the peace.

At time of writing, with at least an hour to go before lunch, reports of minor skirmishes, successfully defused by paramilitary forces, across urban areas had started coming in.

In one instance, Hameed Ahmed, a resident of DHA Lahore, son of Asim Ahmed, lost his cool after his father refused to stop calling Imran Khan ‘Im-The-Dim-Niazi’.

He responded by saying, “your visible envy for Imran Khan makes you blind to his brilliance and courage dad! Everyone can see that this was a US conspiracy but your lot wants to sweep it all under the carpet because deep inside you’re just jealous of the man’s success”. This comment was followed by a tight slap across Hameed’s face following which a Rangers trooper stepped in and sent father and son to different rooms to cool off for 30 minutes.

“We are expecting higher volume of such incidents between 1PM and 2:30PM, which is that dangerous gap between hunger and food being served”, commented a Ranger trooper sitting in the drawing room of a house in F-6 Islamabad, just a few meters from the dining room where a debate about Imran Khan’s popularity had just began.