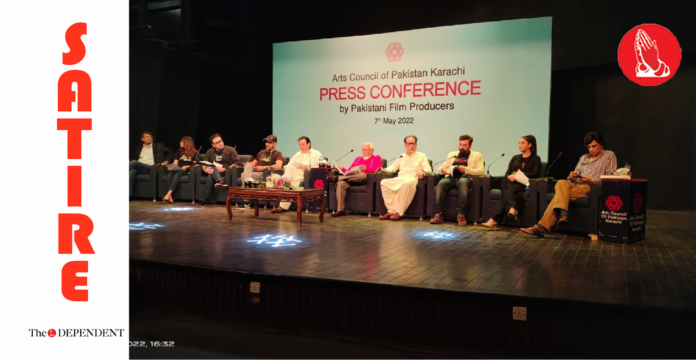 LAHORE/KARACHI/RAWALPINDI – Members of Pakistan’s film fraternity have taken to the press to address the showcasing of what they have termed “imported governments” being given a preference over local cinema.

Pakistani filmmakers such as Adnan Siddiqui, Wajahat Rauf, Yasir Nawaz, Syed Noor, and Hasan Zia called for a press conference at Arts Council Karachi on Thursday, to shed light on why the decision to oust the previous government may be a “deathly blow” to local film producers.

The filmmakers reiterated that while local Eid releases were all set to rule the box office, the removal of the Pakistan Tehrik-e-Insaf (PTI) government last month was always going to pose a threat to the numbers.

“Those who are supposed to save the Pakistani film industry and now busy saving the Pakistan Tehrik-e-Insaf. The biggest among them is interviewing Imran Khan, others are either participating in his rallies or campaigning for him on social media,” Wajahat Rauf said while addressing the press conference.

The filmmakers also reiterated that in addition to occupying the local movie industry in matters beyond their scope, relevance, or understanding, ousting a government ahead of Eid also saturates the audiences’ entertainment coefficient.

“Our masses enjoyed more drama in April than Lollywood films can provide over a decade. Even in May, around Eid, the government and opposition were providing more entertainment than our films can ever dream of,” said Yasir Nawaz.

The filmmakers have urged the establishment to make sure that the next time they oust a government it shouldn’t have a negative impact on the local film industry.

“Stop destroying the Pakistani film industry by bringing imported governments around Eid time. Delay such moves by a few weeks or months to save our film industry,” Adnan Siddiqui maintained.