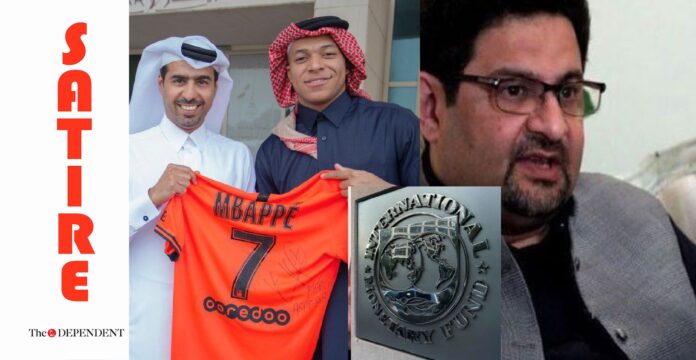 DOHA – Pakistani officials held talks with the International Monetary Fund (IMF) at a luxury hotel in Qatar’s capital under the supervision of French football star Kylian Mbappé, The Dependent can confirm.

As the Pakistan government sought release of more funds from a $6 billion bailout package agreed in 2019 during the talks ending May 25, Mbappé carried out his new role as the representative of the Qatar rulers as the country would look to facilitate future talks of countries with global organisations such as the IMF.

The new role is incorporated in the latest contract that Mbappé has signed with his club Paris Saint Germaine, owned by the Qatar Emir Tamim bin Hamad Al Thani.
It is pertinent to mention here that Mbappé will host the UEFA Champions League final in Paris on Saturday, and also the FIFA World Cup later this year in Qatar.

Reports also suggest that Mbappé has already hosted dialogue on behalf of Qatar in the past, with US talks with the Taliban the prominent among his contributions.

“We are grateful to his royal highness, the joint prince of Qatar and France, Monsieur Kylian Mbappé for overseeing the talks and hopefully convincing the IMF that we need more money, something that his highness specialises in doing,” Pakistan Finance Minister Miftah Ismail said while talking to The Dependent after the talks.

“After the IMF releases the next tranche of the loan, the government of Pakistan plans on going to his royal highness Kylian Mbappé to bail out our economy,” Miftah confirmed.