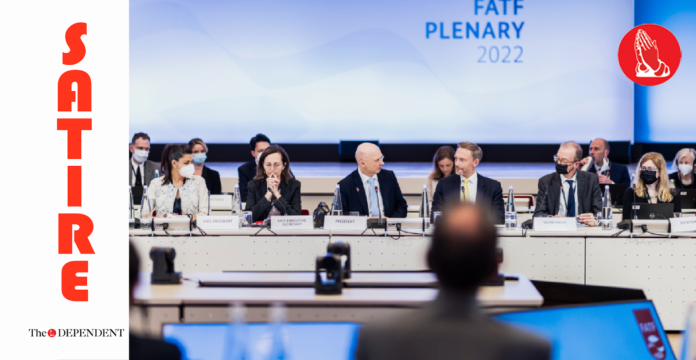 BERLIN/ISLAMABAD – The Financial Action Task Force (FATF) said on Friday that Pakistan had met all 34 items on two separate action plans, adding that the watchdog will now add the final item which the country has to meet in order to guarantee removal from the grey-list.

Confirming that it was scheduling an on-site visit to verify the implementation and sustainability of the country’s money laundering and counter-terrorism financing measures, the FATF confirmed that Pakistan would have to surrender to the Tehrik-e-Taliban Pakistan (TTP) before it is removed from the increased monitoring list, also known as the grey list.

“Surrendering to the TTP would render Pakistan, as we know it, nonexistent, and hence it would no longer be on grey, or any other, list,” a statement released by the global money laundering and terrorist financing watchdog said.

The statement added that Pakistan has substantially completed all items on both its action plans, which showed that necessary political commitment was in place to sustain implementation and improvement in the future, and now all that commitment should be channelised into talks with the TTP, which, the FATF insisted, has “only one winner.”

“Surrender to the TTP is guaranteed by virtue of mainly talking with the group, which we are happy to note Pakistan is already doing,” the FATF statement read.

“Because the negotiations ensure that regardless of who is in power, it is obviously the TTP that we’re talking to as well,” the statement added.

While announcing the watchdog’s decision, FATF President Dr Marcus Pleyer, however, underlined the increased benefits of formalising the TTP takeover saying “they are good for the stability of the country”.

“Obviously there’s a lot of money, otherwise to be spend on terror financing that can be saved, by simply handing over the country to the TTP,” Dr Pleyer said while talking to The Dependent.

“A lot of that, otherwise, is categorised as defence budget, which in turn makes it hard for us to earmark and categorise the channels of terror financing.”

- Advertisement -
Facebook
Twitter
Linkedin
WhatsApp
Email
Previous articleNot allowing Musharraf to come back in peace will hurt morale of Musharraf, says Nawaz
Next articleMissing persons must come to court to verify they are missing, says Sanaullah