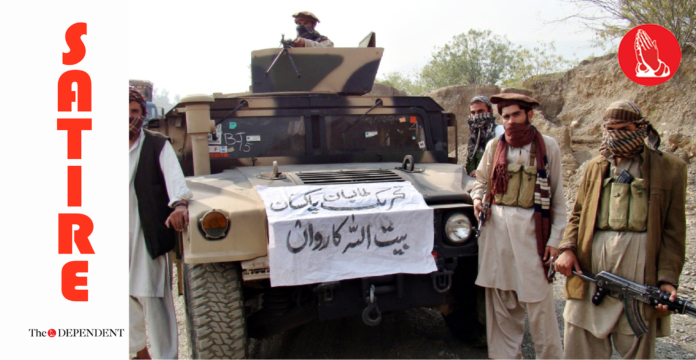 UNDISCLOSED LOCATION – The Tehreek-e-Taliban Pakistan (TTP) has expressed its jubilation over the government of Pakistan insisting that the negotiations between them be carried out under the ambit of the constitution and be conditional to the approval of the Pakistani parliament.

Talking to The Dependent, TTP spokesman Mohammad Khorasani said that the group he represents cannot wait to strike a deal with the Pakistani government despite the conditions.

“The approval of the constitution of Pakistan isn’t a hindrance at all for us. In fact, we are especially excited by the conditions set by the representatives of the government,” Khorasani told The Dependent.

“This is because we are really looking forward to the constitution and parliament trying to bind us to any commitment once we establish the Islamic Emirate of Pakistan and those infidel entities cease to exist altogether,” he added.

Khorasani added that the group relishes nothing more than talking to infidels following their own rulebook, while the jihadists seek to destroy everything barring their own scriptures.

“It is the infidel republic of Pakistan that has a constitution and a so-called government that thinks it has any right to concede anything to those performing jihad for Allah. Sure, they can stick to their own created terms and conditions, while we’ll stick to our divinely mandated ones,” the TTP spokesman said.

However, the Taliban believe that while any agreement would be a formal surrender on the Pakistani government’s part, there is still room for the two sides to come together should the TTP’s ostensible opponents choose the righteous path.