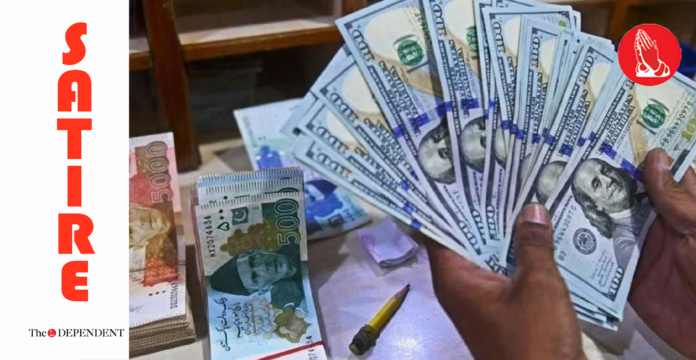 LONDON/NEW YORK/ISLAMABAD – The rupee made a strong recovery in the interbank market on Wednesday, rising by Rs9.59 against the dollar — its highest single-day gain ever – after an unprecedented forex conversion was witnessed across the world.

The State Bank of Pakistan (SBP) said the rupee closed at Rs228.80, up 4.19 per cent, compared to Tuesday’s close of Rs238.38, which The Dependent can confirm was directly caused by an overnight surge of foreign funds being converted to prohibited funds.

Sources privy to those worldwide conversions have confirmed that innumerable overseas Pakistanis decided to convert their foreign currency demanding that exchange companies give prohibited cash in return.

“Hordes of Pakistanis showed up at our offices around the world bringing stacks of funds asking that they be converted to the prohibited kind,” a senior manager of a global currency exchange firm told The Dependent requesting anonymity.

Multiple currency traders have confirmed that followers of one particular political party have been queueing up demanding an unprecedented conversion of foreign funds into prohibited funds.

Data released by the Pakistan Bureau of Statistics (PBS) showed that a mammoth $2.88 billion dollars’ worth of foreign funds were converted to prohibited funds, providing much needed relief to the local currency.