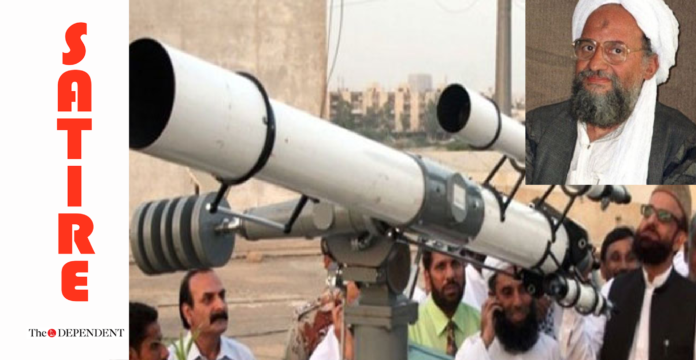 KABUL/WASHINGTON/ISLAMABAD – Questions are being asked over the involvement of the Pakistani state in the execution of al-Qaeda chief Ayman al-Zawahiri by the US in Kabul, after it was revealed that he was eliminated using guilt-edged technology not available in America.

Well-placed sources have confirmed that the al-Qaeda boss was eliminated with unprecedented precision, which can only be achieved through a Ruet-e-Hilal Committee telescope that can spot barely visible, often nonexistent, targets with laser sharp nano accuracy.

“In light of the US’s arbitrarily led operation, it is hereby stated that the Pakistan Army had no idea about the whereabouts of al-Qaeda chief Osama Bin Laden,” it was announced by the spokesperson of the top national institution on Wednesday.

“I mean al-Qaeda chief Ayman al-Zawahiri,” the announcement was duly corrected after an awkward pause of around three seconds.

Even so, question marks remain slashed over the operation, given the accuracy of the execution, which experts insist isn’t possible without Ruet-e-Hilal technology.

“When a target is identified using a Ruet-e-Hilal telescope, the camera operator – sometimes sitting on a rooftop with similarly ambitioned likeminded people in an open-air control room as far away as the moon from Earth – sees, or imagines, a live video stream of the perceived target, which isn’t possible using any other technology,” an official from the US National missile defense (NMD) told The Dependent.

“Using a set of “targeting brackets” on the screen, the camera operator is then able to “lock up” the target and point a laser at it. Once the missile is fired, it follows the path of that laser until striking the target,” they added.

Military sources have long confirmed that the Ruet-e-Hilal telescope doubles up as a missile launcher, which has been a well-guarded secret in Rawalpindi.

“I built this baby,” said an emotional Mufti Muneeb while talking to The Dependent on Zoom via a telescope shaped communication device.

“And now it’s fallen into the wrong hands…” he added dangerously pointing the device towards this scribe.

When approached for a comment, senior Pakistan Tehrik-e-Insaf (PTI) leader and former minister of science and technology Fawad Chaudhary dismissed the Ruet-e-Hilal tech as outdated.

“The Ruet app that we developed was supposed to have a feature which would predict with accuracy when and where any militant chief is going to be eliminated,” he told The Dependent.

“And we will formally unveil it after coming back to power,” he confirmed.