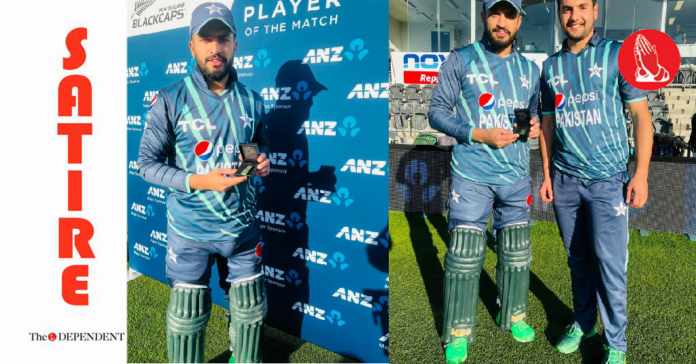 CHRISTCHURCH – After putting in a match winning performance in the final of the T20I tri-series against New Zealand, star all-rounder Mohammad Nawaz announced on Friday he will be wearing his batting pads at all times over the next month or so.

“Sleeping, eating, showering, anything, anytime, anywhere, will be done with my batting pads on. I will even bowl with the pads on,” said Nawaz after Pakistan’s five wicket win, while talking exclusively with The Dependent with his batting pads on.

“I just want to keep the management informed of the fact that not only am I a batter, I am the batter who has decisively addressed your middle-order problems. This is important so that they don’t send me down the order again,” he added.

Sources close to the team management have informed The Dependent that the reminder that Nawaz can bat, in the shape of the all-rounder wearing batting pads till the end of the World Cup, is being greatly appreciated.

“Yes, we forgot that he can do that immediately after he did that against India in the Asia Cup,” a source inside the Pakistan Cricket Board (PCB) said.

“I am certain we would have soon forgotten that he has now done that in back-to-back matches including a final,” the source added.

Sources have further confirmed that with the middle-order sorted out, and its due reminder being given to them, the team management is now working towards consolidating the gains.

“Now that Haider Ali too played well in the final, the team management is looking to add a fourth anchor in the top order to protect the well-performing middle and lower-middle order,” the source confirmed.