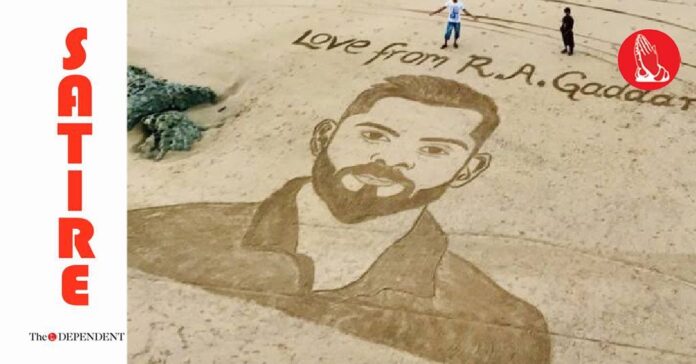 The illegal detention of a young Baloch has been delayed pending the result of the World Cup match between India and South Africa.

“When we first got news that a young Baloch student had drawn a mural in the sand of Indian cricketer Virat Kohli, we jumped at the opportunity” a source within intelligence tells _The Dependent_. “We were supposed to send a car to pick him up the very next day but then we got a little lazy playing a few holes of golf and thought we’d do it the next day,” they explained.

However, things took a surprising turn when Pakistan was defeated by Zimbabwe in their second game leaving them dependent on India defeating South Africa to qualify for the semis.

“When the drawing surfaced we had just been beaten by Kohli single-handedly. But after the Zimbabwe lost a panel convened to calculate what we would need to qualify for the semis and it became apparent that Kohli would have to play well to beat South Africa which Pakistan wants. Depending on the result we’ll decide if the drawing was a dangerous anti-national effort or not.”

According to details available with _The Dependent _, the young man that drew the mural claims to have known this would be the situation in advance. “Well I’m a Gemini, and that basically means I’m an empath so I can sometimes predict future vibes,” he explained. “And Kohli is a Scorpio and all Geminis have a special connection with Scorpios so I just knew this mural would be important.”