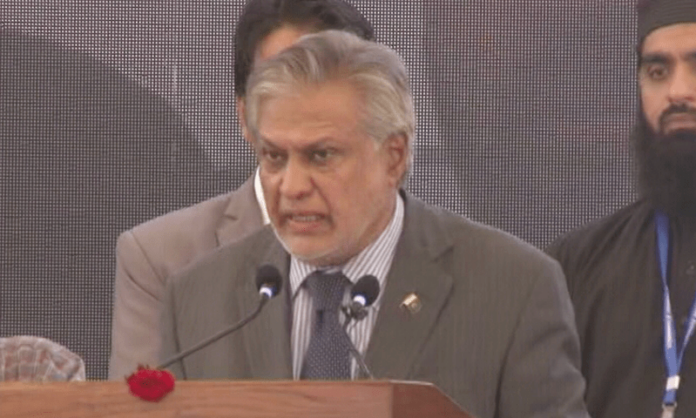 KARACHI – Finance Minister Ishaq Dar on Wednesday said that Pakistan could become national-interest-free in five years as he urged all of the nation’s sectors and institutions to continue working towards their own interests.

He expressed these views while addressing a seminar at the Federation of Pakistan Chambers of Commerce and Industry in Karachi where speakers spoke at length about interest-free nationhood.

“I think we are almost there, and we will get there with the institution’s help. I am confident that in another five years Pakistan will be completely free of national interest,” Dar said.

“And as always it will be the Pakistan Muslim League-Nawaz (PML-N) who will be at the forefront of another milestone for Pakistan, when we announce the country as national-interest-free at the end of the next tenure,” he added.

The court had ruled that the federal government and provincial governments must amend relevant laws and issued directives that the country’s governance system should be free of national interest by December 2027.

The court had also added that much of that might be irrelevant since those who form the governments are gradually pushing the country towards fulfillment of that goal anyway.

“But when you give due credit to those who form the government, do not forget to give some credit to us as well,” Dar maintained.

- Advertisement -
Facebook
Twitter
Linkedin
WhatsApp
Email
Previous article‘Will postpone elections for as long as it takes for you to love me,’ romantic Sana whispers in your ear
Next articleDecisions taken in Rawalpindi cannot be reviewed, everyone told